I made a comment to an article on permaculturenews.org and put the link to this blog as my website (which will show up as a link for my name). I timed it well as the moderator approved my post (along with a couple of others) almost immediately. Today I check back to look at what other comments were there and discovered that the link to this site had been removed. Someone really doesn't like what I have to say!
Posted by Unknown at 04:16 No comments:

So who is Greg R? For reasons that I will explain, I have chosen not to reveal my identity online in what can be fairly robust discussions.

I was born in a rural area of a third world country but am very lucky that my family moved to a first world country when I was young. I was your classic nerd throughout my teens and had a love for science and learning that has never abated. As a young man I had strong environmental leanings and remember as a University student writing letters to politicians supporting environmental causes (causes that I still believe in). I completed a Science degree at University (taking units in the physical sciences, mathematics and computer science) but I have to admit that I was never even taught the scientific method as part of that degree. A postgraduate research degree enabled me to then work performing research followed by a career in IT.

I've been participating in a number of conversations on blogs and forums. My approach has been to try and use the scientific process, to focus on the actual data and if it supports a position or falsifies it. In a number of cases I have been able to engage with people. Rarely has anyone from the alarmist side of the discussion been willing to look at the data and see what it says, but I have called on people to look at the data for themselves and see if it supports the predictions made or not. When posting on other people's blogs you are at their mercy as to whether or not they will let you comment and it's been good that my posts weren't blocked. But the situation that drove me to set up this blog is where I was cut out of a conversation, it appears because I attempted to counter their arguments with empirical evidence. If I want to have my say, I need my own blog so here we are.

Over at Temperate Climate Permaculture, John Kitsteiner describes himself as a "fundamental Conservative Christian Evidenced-Based-Environmentalist Libertarian". I can align myself with all those labels too which is probably one of the reasons I get so much out of his blog. But permaculture brings me into contact with a diverse range of people, many who are incredibly different to myself.

One of the greatest strengths of permaculture is a philosophy not too different from the scientific process. I really want to align myself with the permaculture movement but I do worry that some of the most prominent proponents have bought into the CAGW theory and the wider population might link permaculture to it through their activities. This is the reason I decided to start commenting over at the Permaculture Research Institute's Permaculture News blog on some of their global warming articles. I don't want to see what is arguably the leading permaculture news site to be seen as just an enclave of people pushing CAGW.

I believe permaculture brings solutions to many of the environmental problems we face. Projects such as Greening the Desert show how even in the worst of locations permaculture can transform the landscape, creating a productive environment. This year I will be completing a Permaculture Design Course and who knows if it will take me anywhere career wise, but on a personal level it will enable me to take work on my own property a lot further.
Posted by Unknown at 23:42 No comments:

Welcome to "Skeptic, Not Denier" 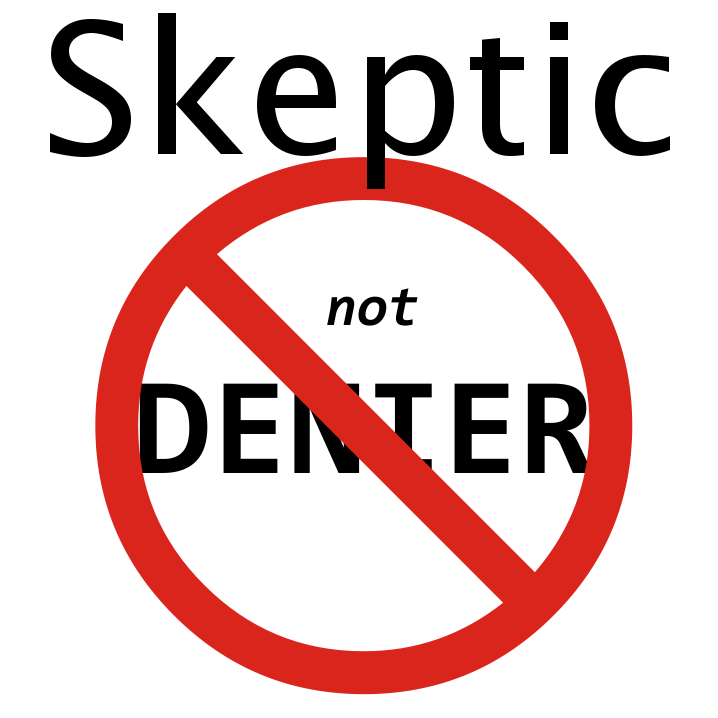 Welcome to my blog, Skeptic, Not Denier. The name is inspired by the continual labelling of CAGW skeptics as "deniers". This is a common tactic by those who support the CAGW position and is a dishonest attempt to manipulate and control the narrative. Often skeptics are referred to as "climate change deniers" or simply deniers, a statement that is completely untrue:

So what are skeptics skeptical of?
Note that skeptics don't have a club or organisation where they decide on their beliefs. There is a variation in what conclusions they have come to (and in fact, over time their understanding will change). The above are some of the more common positions you will find amongst skeptics.

I have created this blog in an attempt to take a bit more scientific look at the issues and people's response to climate change (but more of my motivations in later posts). My aim is to encourage open discussion and to that end I hope to not have to remove comments - at least ones I disagree with (although I make no apologies for removing illegal/offensive/etc comments).
Posted by Unknown at 22:09 No comments: